Xara Web Designer 365 is the first release from Xara under its new and unique 365 Update Guarantee. Customers who buy Designer 365 products will be purchasing a perpetual license to the very latest version, but they will also be able to access new features and content as Xara develop them in the 365 days after purchase. What’s more all supporting online services – such as hosting and Xara Online Designer - will be included free during those 365 days.

The first release of Xara Web Designer 365 is already packed with new features, and there will be more to come under the 365 Update Guarantee. Parallax, reveal and scroll animations are popular in contemporary websites, so the April 2016 release adds parallax scrolling, 30 other types of scroll animation, plus 40 new ‘on reveal’ animation types. The popular ‘sticky’ feature has also been enhanced, so that items such as NavBars will stick to the top of the window when scrolling the page up.

Xara has also evolved its unique Xara SmartShapes concept to include more complex objects such as smart charts and photo grids. A SmartShape API will soon be available to third parties enabling developers to add new enhancements to Xara Web Designer. Those JavaScript SmartShape plug-ins will work with both the desktop Xara Web Designer and Xara Online Designer.

The initial release of Xara Web Designer 365 includes two new types of photo grids. ‘Static’ Photo Grids are simple, fixed, visually attractive grids of photos onto which users can drag & drop their own photos and then scale / rotate / pan to adjust the photo within its frame. ‘Smart’ Photo Grids smartly resize to fill the rectangles as photos are added or deleted, and users can swap the positions of the photos, adjust the number of rows and columns and the border / gap between all the photos. 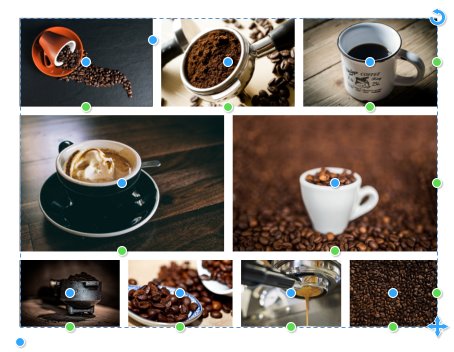 The photo editing tools have also been enhanced, with a new ultra-easy way to rotate, scale / pan and crop - great for horizon straightening!

Another addition recognises the popular trend of incorporating simple vector graphic symbols into websites, such as social media symbols, shopping cart or credit card symbols. The existing Font Awesome symbol collection has been supplemented with Google's Material Design icons, providing integrated access to more than 1500 high-quality, professionally designed vector icons. And to find a symbol, there’s a new easy search function. The Xara Web Designer symbols can be inserted as editable vector graphics, or inserted inline into text as a font (where they are automatically placed in a subset of symbols used, converted to WOFF and included in the website HTML).

Xara Web Designer includes the cloud-based editor, Xara Online Designer. This gives Web Designer owners the flexibility to edit their Web Designer sites in a browser, from anywhere and with any device and sync their files with Dropbox, Google GDrive and Microsoft OneDrive. Xara Online Designer is still in beta but evolving rapidly with planned enhancements (which will be released under the 365 Update Guarantee) including more editing controls such as colour, transparency, stack order, smart snap and SmartShapes.

The combination of Web Designer and Online Designer means that Web Designer customers have the unique ability to edit their document both offline or online. Furthermore, it gives commercial designers using Web Designer the option to enable their clients to update their own website to edit text and replace photos. Client access is free.

Charles Moir, MD of Xara said “Xara Web Designer 365 is an important change for us, away from yearly releases and version numbers towards more regular releases throughout the year. So features that we develop 3 or 6 months from now, which would traditionally not be available until the 2017 release will now be included in this year's product.

Although Xara Designer 365 includes a component of online services that are subscription, (hosting, domain name, Online Designer) it's important to understand this is not a subscription product in the way that Office 365 or Adobe Creative Cloud are. With Designer 365 you purchase the program which is yours to keep, and it will remain functional even if you do not renew or upgrade. We think this is a fundamentally better deal for customers.”

Web Designer Premium includes an upgrade to ‘Website M’ hosting, free for one year (worth \$1.99 a month). This includes 2GBytes of free web hosting space and one free domain name (e.g. yourname.com or .co.uk, etc).

Example websites showing some of the new features

Xara Web Designer operates on Windows Vista, 7, 8 and 10 and requires a minimum 500MB of RAM and 300MB hard-disk space. Web Designer includes free hosting with 500MB of web space. Premium includes an upgrade to ‘M’ hosting, free for one year, which includes 2GBytes of web hosting space and a domain name (e.g. yourname.com or .co.uk, etc).

Found this interesting? Spread the news by clicking below: