​There's an all-new look to Designer, including modern skin and icons.  You can see some screenshots here. 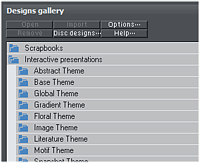 ​A hierarchical arrangement of the Designs Gallery makes it far easier to find the template you're looking for at a glance.

Automatic backup of all open documents 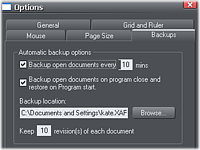 A new set of controls in the Options dialog provides an automatic backup facility where the program can regularly save copies of all open documents. You can set the folder where these backups are saved, and how often the backup occurs.​

Fly-out tools and buttons present a simpler user interface, but with direct one-click access to a wider range of common functions. Many buttons now have a fly-out menu with related options. These buttons have been carefully designed so that you can still get to the main function with a single click of the button, but also very quickly access any of the additional options without any extra clicks.​

Automatic save and restore of open documents on application closedown

You can now just close Designer (or shut down your computer) and Designer saves all open documents and restores them the next time you start the program. ​

The Page & Layer Gallery (replaces the Object Gallery) now shows all the objects on the page, and includes thumbnail views of all objects. This makes it easy to find, select, lock or hide objects inside complex drawings, or objects inside groups or even hidden under other objects on the page.
The updated Page & Layer Gallery now also offers better page and layer management,  including a new 'Solo' mode which allows a specific layer to be viewed and worked on in isolation, and a new 'Layers' mode which adjusts the Gallery to show just the layers for the current page.  You can also move directly to any page in a long document by clicking on the page in the Gallery. Plus there's a new 'Find' mode which automatically adjusts the Gallery to find and show the currently selected item in the tree structure, collapsing everything else.

There is a major change in the way that attributes (the appearance or 'style' of an object) are applied to a newly drawn object or line. Now a new object can take on the style of the last selected object, rather than the last drawn. It sounds like a small change, but is more intuitive and more powerful - for example you can copy the style of any object by just selecting it then drawing a new object.

​Support for pressure sensitive tablets has been re-written so it's much more accurate and responsive. This also works as solid real-time variable-width rendering as you draw with a pressure pen on a tablet.

​Enhance Transparency allows you to adjust the brightness, contrast, color saturation and color temperature of any part of your document, including text and drawings.

Simply create your floating ‘enhance transparency shape’, and use the Photo tool controls to set its brightness, contrast etc. Objects with Enhance Transparency are just perfectly normal objects which can can be placed over any drawing, not just photos. They act like other transparency types, showing the objects underneath the shape, but the items under it are 'enhanced'.

You can use the Transparency slider to adjust the overall transparency or 'blend' of the effect and even apply graduated transparency to create a gradual fade of the enhance effect.

The InfoBar in the Selector tool has two new fields displaying the perimeter length of any selected closed shape or the line length, and the area of any closed shape. Particularly useful for plans where you have set up accurate unit scaling.

​There is a new copy / paste fly-out bar on the top toolbar, which provides direct access to the common clipboard operations: Cut, Copy, Paste, Paste in same position, Paste Attributes (an easy way of copying the style or appearance from one object to another) and Paste Opacity Mask (see above).

​The Text tool has been improved to include bullets, numbered lists and indents.

A real-time search and replace function has been added to the Text tool which can search the current story, page or whole document. 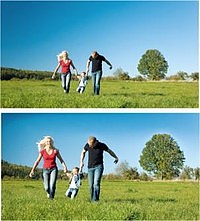 ​This has been enhanced with some innovative new intelligent scaling features. 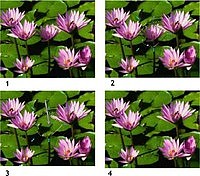 ​This is an entirely new tool on the Photo tool fly-out to make it easier to 'erase' region of photos by copying (cloning) parts of a photo from one place to another, even from one photo to another.

In the Clone tool you simply draw a freehand line around the area you want to erase (the clone shape is shown as a 'marching ants' dotted outline) then just drag anywhere on the photo outside the clone area to pick the new source for this area. You can resize the clone and feather the edge to achieve near perfect results.

​This is a new tool available on the Photo tool fly-out,  a simple one-click way to automatically correct common perspective effects. 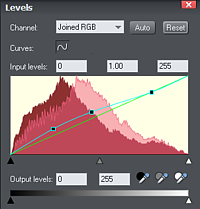 ​In the Levels dialog you can now create a manual brightness curve which provides very detailed and advanced control over brightness levels for any photos. 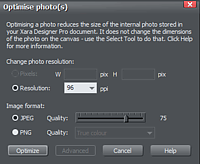 ​You can now perform selective enhancements (brightness, contrast, saturation, warm/cool color temperature, blur/sharpen, levels) to any part or region of a photo using the Mask feature (now at the bottom of the main toolbar). You can adjust the blend of the effect by using the Transparency tool, for example by creating a graduated transparency you can create a faded enhance effect.  And the Feather slider can be used to create soft edges to your enhanced region.

You can create any number of successive enhance areas, one on top of another, using the same technique.  This provides a very powerful method of adjusting the brightness, contrast, blur etc of areas of photos in a fully editable, non-destructive, reversible manner.

Such photo edits now create a new 'Photo Group', which acts like a normal photo for most purposes, but is also a Group that contains all the individual edits as overlaid vector objects. Photo Groups can be disassembled into their constituent objects, you can still select the 'edit shapes' that are inside the group and you can 'flatten' a Photo Group into a normal JPEG.

​In the Photo tool fly-out is an EXIF dialog, semi transparent and configurable, which shows the embedded EXIF values of a JPEG photo. EXIF data is now preserved on export of JPEG photos and across an Optimize Photo operation.

​Now you can just open a JPEG, edit it, and click Save to get an edited JPEG saved back in its place.  It’s a faster and simpler workflow than before, doing away with the need for separate saves of the .xar file and export of the JPEG. And yet the the original master JPEG is still retained and can be recovered or restored at any time, there is still a lossless editing cycle, and you can still open an edited JPEG file and remove or undo the edits you've performed on the image.

In the Freehand tool, there is a new option on the Infobar which can assist in drawing of vector lines around the outline of high-contrast shapes or objects in photos.  Simply select this option, and then draw around the edge of the shape, and the program will analyse the underlying image and draw the line along the edge.

​Normally when you resize a photo in Designer it retains the original image and just changes the resolution to fit the required size on the page (this means all resize operations are lossless, non-destructive, and resizing an image back up will result in a sharp non-blurred image again.) Sometimes it's useful however to have a 1:1 mapping between image pixels and screen pixels, so you know at 100% zoom that you are seeing the full resolution, non-scaled image. So now in the Photo tool on the Infobar there is a new icon which will resize the image back to be 1:1 at 100% zoom (in other words 96dpi - the same resolution as the screen).

Designer now comes with a free website hosting offer from MAGIX, so you can publish your website as part of Magix-Online world.​ The offer includes 500MB of storage and your own web address.

Auto filling of the photo-gallery via simple drag 'n' drop

​If you drag and drop a selection of image files onto a page of thumbnails, such as any photo gallery design from the templates (each Theme has one 'photo gallery' layout), it will automatically populate the gallery.